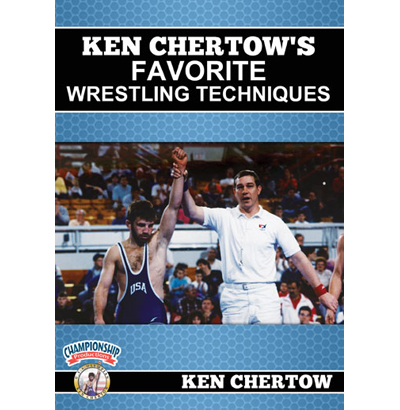 Ken Chertow covers a broad range of techniques from critical situations in the neutral, top, and bottom positions. Instruction includes:

· Re-shots – Re-attack your opponent following his shot and, while he is coming up and his momentum is forward, change levels to execute a re-shot.
· Frontal Assault Position - This aggressive sprawling position leads to punishing moves like the snake, the twister, cradle and face lock.
· Scoring When Stuck Underneath Your Opponent – Defend your opponent’s front headlock by controlling the elbow and looking for moves like the cross knee dump, outside fireman’s carry, sucker drag, and peek out.
· Cross-Wrist Roll Series – Coach Chertow presents a series of tilts designed to take your opponent to his back and allow you to score points quickly with the cross-wrist roll, rebar tilt, and ball and chain series.
· Bottom Techniques – Wrestlers often struggle to get off the bottom with conventional stand-ups. When your opponent’s top pressure prevents you from doing a stand-up, it’s a good time to hip heist and execute a move like a side roll to take your opponent directly to his back.